The Role of Curriculum in American Competitiveness

American Competitiveness is slipping.  Whereas the United States once occupied the top slot in the World Economic Forum’s rankings, it hasn’t surpassed the fifth slot in the past three years.  This fact isn’t a matter of looking at the problem from a liberal or conservative perspective, it’s simply a matter of seeing the strengths and weaknesses of the United States in comparison with other countries. 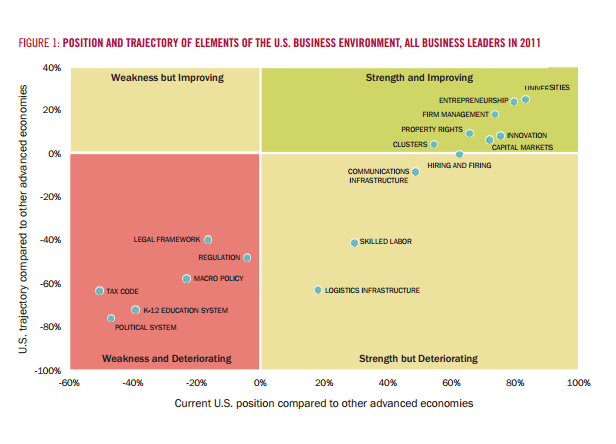 Determining a method of resolving these weaknesses is often times a far more difficult question to answer, and for good reason.  Issues such as the political system itself, the tax code, and infrastructure are often times pushed under the rug, or are so politically charged that hopes of a non-controvertible answer are slim to none.

According to Harvard Business School, one of the leading institutions on American Competitiveness, one of the United States’ greatest weaknesses is K-12 education.  An even more frightening prospect is that education appears to be deteriorating rather than improving.  This prospect has far greater implications than ones relating to intelligence or a strong workforce, as evidenced by August Cole’s white paper for the American Security Project that argues declining education “is also closely linked to the military’s ability to field a viable force” among other potential factors.

The Presidential Administration and both bodies of Congress understand that this problem exists.  Furthermore, solutions have been attempted and passed into law.  However, these rectifications are far from complete and sometimes even act in a manner that is counterproductive to those they hope to help.  An excellent example of this is an increased reliance on quantification in the classroom.

One of the most notable examples of this fact is the adoption of Common Core State Standards (CCSS).  This initiative seeks to implement “a set of high-quality academic standards in mathematics and English language arts/literacy.”  Although most states have implemented one form of standards or another, this national effort seeks to align the various states, while leaving the individual curricula untouched.

In addition to placing a greater focus on understanding, CCSS also hopes to place an emphasis on depth, rather than breadth in K-12 mathematics; a focus on evidence-based learning in the languages; and higher levels of nonfiction reading at a younger age.  The overall goal is to have these measures best prepare students for “college, career, and life.”

I have little doubt that this robust set of standards will help improve education in the short and long-term, especially in states with woefully underprepared systems.  The question remains, however, do these standards boost the top-tier, or simply raise the bottom?

Designing a Solution that Works

I do not mean to argue against strengthening the weakest chains in the United States’ education system.  In fact, I believe it to be critical that states and districts with the lowest scores be supported in every manner possible.  What I am saying is that those with an intelligence that cannot be classified by numbers, scores, or statistics, do not benefit from academic standards, and it is quite likely that many of them are hurt by it.  As such, education reform should not start with quantification, but qualification.

This qualification can mean a great many things — too many for a report of this length, but I’ll use a brief example for now.  The education of Thomas Edison, one of America’s most prolific catalysts of innovation and growth, was based upon reading, qualitative analysis, and even art.  Although Edison struggled in traditional schooling, these methods of learning spurred his desire to create and expand his knowledge.  After all, it was his curiosity and deconstruction of his telegraph machine that spurred his desire to create a telegraphic stock ticker, not his instruction in the classroom.

Current measures do little to spur this desire for learning — they simply ensure the base level of subjects are being learned.  We may not be able to tailor each individual student’s curriculum to their interests, but we can stimulate their desire to learn.  Through this stimulation of a student’s innate desire for learning, we can best prepare him or her to become the leaders in the 21st century — whether that leadership may be in politics, business, or the arts.

Join our email list and be the first to know
about special events and more!

No products in the cart.